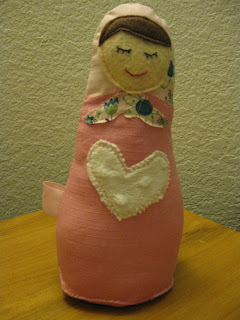 It's a softie, rattle, taggie Matryoshka dolly! This dolly looks almost like I envisioned it. I have plans to revise the pattern a bit and do a full tutorial. In the meantime, I will share the creative process.

This is an idea I have been contemplating since I made these Matryoshka Valentines. (Hard to believe that was nearly two years ago now!) Those Valentines were inspired by the beautiful Matryoshka set that my inlaws bought us on their trip to Russia.

In other related news, I am going to be an aunt for the first time! Actually for the first time on both sides. Cliff's sister and my brother are both expecting their first daughters this spring. And, my cousin is also due at that same time. Three new baby girls within weeks of each other.

The first up, due in March is baby AJ. And, although my niece is not yet born, I felt a little something, something was in order this Christmas. Plus, I just got a new sewing machine! Try to hold me back! 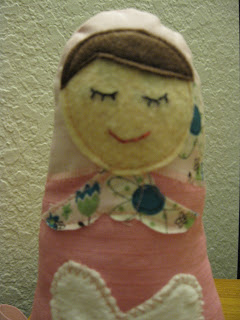 The face was heavily inspired copied from this photo/blog that I discovered via flickr.  For the first time ever, I drafted my own pattern. I did use the Noah pattern from the Woman's Day Book of Soft Toys & Dolls for some guidance. 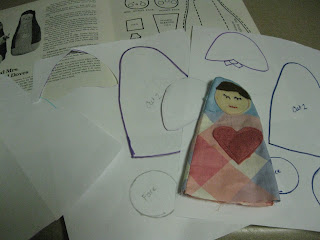 Here is an early prototype. It was cute, but the blue satin started to pull out and fray after turning. Plus, it kind of looked like a Virgin Mary Matryoshka.

So, I redrafted the pattern to be considerably larger and less religious. I also skipped satin and instead added a ribbon taggie for that smooth feel. For other texture I used a bit of velvet ribbon and a minky heart. 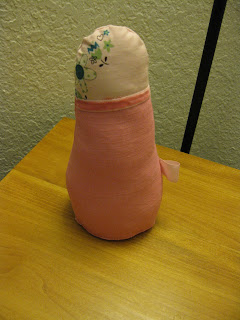 My "ah ha" idea was to use an empty hotel sample bottle filled with assorted beads etc... for a rattle. 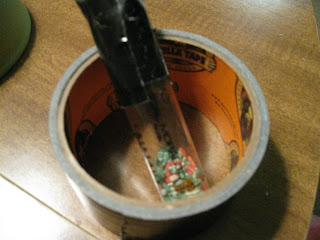 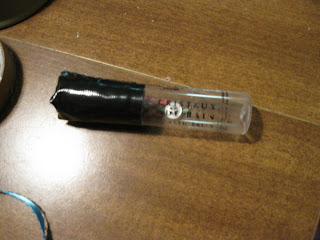 To make it safer and totally washer friendly-I sealed the bottle well with Gorilla tape. Then I bore a hole in the stuffing and jammed it in so that it was pretty evenly surrounded by stuffing. 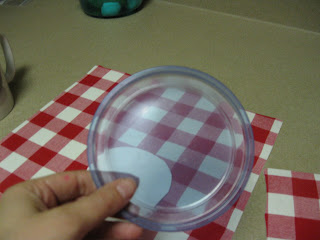 I used the lid of a cheap Gladware type container to stabilize the bottom.

I like how simple and sweet this is. However, I also have plans to do fancier versions. More to come!

In the meantime, Merry Christmas! I hope the spirit of the season is with you. I hope that you are warm and dry and with the ones you love.

I am linking up at Free Pretty Things today. Stop by to check it all out!

Thanks for sharing, it is great!

I love it! I'm still sad I wasn't part of the Valentine swap the year you made the matryoshkas. :) I'm going to be an Aunt for the first time, too. Mandi is due in May, it's a boy. :)

Oh my gosh I am in love with this!!! My daughter is 2 now...but I still want to make her a little set of these for her birthday in march:)