I am learning to be very flexible as a mom. I had planned to have the party at our church. They have a lovely parlor and kitchen area. It has plenty of tables and chairs and a huge stone fire place. There is plenty of parking. I was looking forward to showing off my church.  About an hour before the party as we were just setting out, my friend called to tell me that all the roads leading to our church were being closed for the Hollywood Christmas Parade. This annual event had escape my notice during the 8 years we lived just a block away. How I missed this huge planning snafu I can not say. However, there was literally no way around it. So in an instant I changed the party to our apartment. I quickly divided up the guest list and we each called and emailed our respective friends. I backed the start time up one hour to give me time to clean the apartment.

And, everything came together beautifully! Many guests had cancelled due to illness- was nobody spared the 24 hour stomach bug? Other friends were trapped on the other side of the Hollywood parade. So my guest list was much smaller and more manageable. Perfect for a home party.

This pretty tissue flower came from the 99 Cent Only Store. It was leftover from Easter. I just replaced the eggs with a Matryoshka.

I filled my Christmas door box with party blowers and quickly taped another Matryoshka over the reindeer.

This summer (OK six months before her party) I found this scrapbook pad by Martha Stewart at AC Moore. I instantly fell in love with the vintage look of the patterns and the teal, aqua, red and pink colorway. So this paper was used in all of the decorations. For the banner I covered a $ store banner in scrapbook paper. It is held together with brass brads. I love it and plan to swap out the Matryoshka dolls for Raggedy Anne next year.

Ikea had the perfect pale aqua napkins. I made paper napkin rings on the computer to again tie in the theme.

We used photos of the birthday girl and a tall desert table for the rest of the decorations.

I had streamers and a balloon garland planned, but it was not to be. No matter, it just means that I am extra prepared for next year!
Posted by Jane at 12/04/2012 1 comment:

My Baby Turned One!

There are so many things I could say about Marilee and how time flies and all that, but I find myself at a loss for words to describe this year. I wish I had blogged it more so I could look back. Sigh. No matter how neglectful I have been of this space, I wanted to document her first birthday. 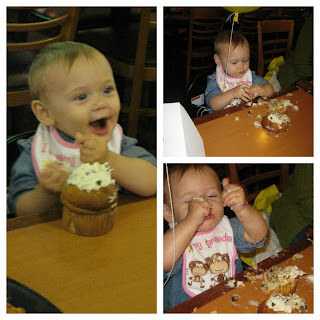 Since her birthday was the day before Thanksgiving, we had a small little dinner with the grandparents at Shakey's Pizza. I bought her one cupcake and she loved it. Not sure if any actually got into her mouth, but she loved playing with it. I loved that Shakey's carpet got ruined and not mine.

We also had a lovely party with friends and I want to document that as well. But, it's off to work for me for now. Thank you blogging friends for your love and encouragement over the years. My cup overflows.