Getting My Crafty Feet Wet

So, it's not so easy to craft with a baby. I know that many of you are probably thinking, "Duh!"

With so many blogs named things like "While She Naps" and "Nap Time Crafts" etc... I kinda thought there would be more time. Maybe if I had a designated space to craft in, it would be easier. Much of my craft energy is sucked up just thinking about the time it would take to set up and clean up. That's when I just say, "Nah" and go on Pinterest instead. The weekends fill up so quickly now too. It really is a whole new world. I knew it would be. I just didn't know in what ways.

Anyway, I have made three things lately that are blog worthy. Probably even worthy of their own posts, but as they say, "Those were the days."

Project 1. Cookies for my niece Ava's first birthday. My sister in law stayed home this year. Awesome opportunity! No paycheck. Womp, womp, womp. So when first birthday time came around I offered to help with the party in lieu of a birthday toy or outfit type gift. The cookies that I made were the party favors. 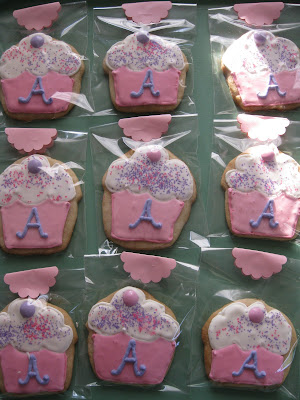 This was a whole family effort. Cliff watched the baby while I worked pretty much round the clock. Marilee did get in on the action during some of her feedings though. The party colors were pink and purple and timing was perfect to get Easter m&m's for the "cherry" on top.

I had grand packaging ideas courtesy of Pinterest.  In the end, I stapled the bags shut and hot glued a scalloped cut out over the staples. I mailed out 60 of these babies and only 11 broke in transit. Not too bad. My SIL needed about 40 for her party.

Project #2 My other niece, Elle, also turned one this month. (Both nieces are only a day apart in age!) While I would have loved to do something just as grand for my little Elle, I simply didn't have the time or energy.
I decided to give them something sentimental. The inspiration pin:

Source: eighteen25.blogspot.com via J on Pinterest
Cute right? There are so many changes in the first year that I thought it would be great to capture them in one place. Also, what do you do with all the cute snapshots other than put them in an album? I wanted those little moments to be available for more frequent glances.

Here is my version: 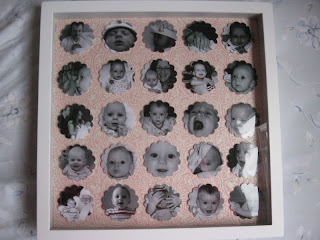 I am not even going to apologize for the photography. It is what it is these days.

I chose a shadow box frame. I used the scalloped punch that I already had and mounted the photos with thick mounting stickers that stand out a bit. Elle's room is pink and white, so I used pink and white scrapbook paper for the background. I had planed to make a flower for one space similar to the star above, but I couldn't vote any of the pictures off of the island. This Auntie loved them all too much.


Sleeping, crying, the little hands. I know I want to remember all these little things! 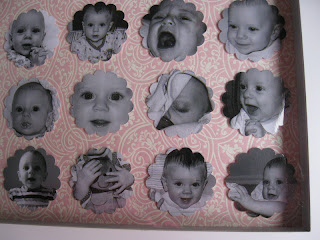 I spy a Molly Monkey! Yes, it turns out it's a favorite!

This project was quick and easy to make. I lifted the pictures from my brother's flicker and facebook accounts. That took the most amount of time. The rest was a breeze. 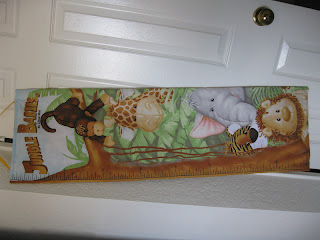 Project #3 hardly deserves to be called a project. It comes from one of those pre-printed panels and was sewn together in minutes. Although, I would like props for dragging out the ironing board. That thing hasn't seen the light of day this year.

I was super psyched to find this panel because Marilee is going to a birthday party this weekend and I needed something extra for the gift. My colleague volunteered at the LA Zoo for quite a while and was especially involved in the new elephant exhibit. So this is perfect for them.

I had emailed my friend about sizes and such and she told me:
They like primary colors and especially spring green. The baby is thin, so elastic waistbands are a must. They prefer gender neutral stuff and they love animals.

I am pretty excited about the gift. I found this adorable spring green panda sweater at Crazy 8 and paired it with some black leggings.

Crazy 8 is my new favorite kids store. I haven't bought Marilee anything from anywhere (except for socks) because we have gotten tons of  gifts and  hand-me-down motherload from my niece Ava and a few other friends. But, I have gotten a few things for Ava as thank you treats and the prices are fantastic! Also, I like that the clothes look like they are for children. Baby Gap can be hit or miss. Sometimes it's awesome. But I went there once when I was pregnant and everything looked like a shrunken version of Banana Republic. I don't need my babes to look like they are going to a cocktail party after a full day at the office.

It feels good to be back in this space. Summer is just around the corner. We have grand travel plans, but hopefully, I'll get back to crafting too. It really is part of who I am and I miss it! How have all of you been?
Posted by Jane at 3/18/2012 3 comments:

A Quick Note of Thanks

Sara made us this wonderful quilt that looks like a piece of notebook paper.

I think it's safe to say that both Marilee and I love it!
What makes it extra special is that we had picked out her name years ago after we were first married. That first year here in LA I had to take a bunch of classes to get my CA credential. During the dull moments I would write all our initials, and write out her name dozens of time. Cursive, print, you know, just like in high school. Only I was 32. I have to dig up those notebooks. I bet I could find the pages.

So, in other news, this Tuesday feels like it should be a Friday already. Nothing serious or bad, just seems like I've already put in a full week. How about you?
Posted by Jane at 3/06/2012 3 comments: