When a couple announces their engagement there is much anticipation on both sides of the aisle. We have two family weddings this year and I really wanted to do something unique and special for each. I got the idea to make family cookbooks and to publish them with Blurb.com.

Now that I have spoken to my brother and the bride to be has been properly surprised, I can share my crafty endeavors!

My thought was to make my cousin's cookbook first and just add to it for my future sister in law. It turned into a six month labor of love. It took a village to pull it off.

Cliff took the cover photos. The aprons featured were also gifts to the brides.

The first big job was to scan all the family photos. On my two trips to Florida I did my best to scan as many family photos as possible. At this stage I really had no plan and was just guessing. As the recipes from family members started to come in, I got an idea to match recipes with photos and time periods. For example, pictures of us as wee shrimps to go with shrimp dip. I also wanted pictures of the bride with the recipe contributors. Uncle Fred's favorite cookies along with pictures of Uncle Fred and Suzannah throughout the years. 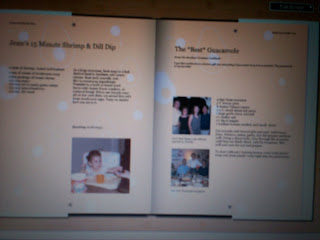 I have fairly photographic memory of our family photo albums and frequently called home with requests.

"Do you remember the photo of the picnic at Great Grandma's house when Aunt Jean wore a blue jumpsuit? No? Well, it's there can you find it and scan it for me?"

During the process I called my grandfather to ask him for food memories. I got some priceless stories that I am not sure anyone else in the family had ever heard. This alone was a huge blessing.

Suzannah's book was completed fist. We had it sent to our house so that we could inspect it. I could not be more pleased with the quality of the photos. Even scans of old photos that had that bumpy mat texture turned out well.

For my sister-in- law-to-be, I copied the entire blurb book for my cousin, changed the photos to feature my brother and then added my father's side of the family.

My Aunt Janet filled me in on cooking in the "old days" when my grandmother would spend Saturday mornings baking for the week. I think it's genetic that most of the recipes were for desserts.

Another cousin had scanned many pictures for our family group on Yahoo and this was a tremendous resource.

Somehow during the process I joined facebook (a whole 'nother blog post) and was able to connect with other cousins who have scattered far and wide. You betcha I lifted their profile photos to include!

I must admit that at times, after hours of sorting through photos, I became very homesick. This would have been even more fun if completed by a committee of cousins sitting around a table with coffee and conversation. Blurb does have a feature where others can contribute to the books, but I wasn't sure how to get that started with a less than tech savvy crowd.

Now that I have both sides of my family complete, it will be easy to delete pages as necessary, update photos and make books for other cousins. I have plans for a graduation gift and maybe...another bridal shower.
Posted by Jane at 9/28/2008 7 comments:

My dear, dear friend Kate came to visit me in May. Her visit came at crossroads in my life and having my sisterfriend all to my self for nearly a week was a huge comfort. I couldn't even go to a movie with her because I didn't want to miss out on a minute of visiting. We stayed up late and packed our week with activities.

On Saturday we went to the Festival of Books at UCLA. While in a booth devoted to picture books, Kate commented on her childhood love for illustrator Garth Williams.

She was scarcely on the plane home when this idea came to me. This illustration comes from Stuart Little. I chose this illustration to make the most of the current aviary and cupcake trends. It's printed (inkjet) on plain muslin backed with wonder under. (So don't wash it Kate!) It's stuffed with one of those travel sized pillows that are found at Anna's Linens.

I finished the pillow in May and it was "burning a hole" in my bloggy pocket all this time!

Now that Kate's birthday has come and gone, I can finally share it with all of you. I've missed blogging, but I have been a bit bogged down at home. I have a lot of upcoming gifts to share. By the end of October, I will be free to come clean with all my crafty secrets.

My vacation is coming up in just 7 weeks and I hate to admit, part of me is counting down the weeks. I look forward to waking to sunshine and cool fall breezes. Having some time to sew and make soups. I look forward to having time to enjoy blogging again. 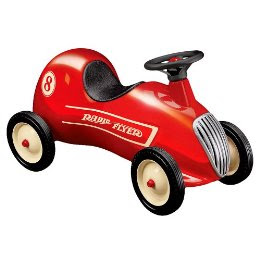 This is the stock photo from the Target site where they sell this car for $64! The one I got is slightly less glossy and the horn has been removed. Someday, I think I will appreciate that fact. In the meantime, it looks really cute in the corner of our red and white living room.
Posted by Jane at 9/05/2008 1 comment:

My Sewing Mojo is Back!

I finished the I Spy quilt! It's probably actually a "throw" since I didn't quilt it.

For quite a while now, most of August, I haven't been in the mood to sew. Our bedroom is very hot with lots of sun and little breeze. The air conditioning isn't too effective on the fifth floor. Maybe that was part of it. Regardless, it was quite a sewing funk.

I was also really torn on how to finish it. Binding? No binding? Quilted? Tied?

Finally, yesterday I got back up on the horse and started sewing again.

My original thought was that this would be for long car rides and plane travel. Entertainment and comfort. I also wanted to include family pictures so the little kiddies would remember us should they move to China. I love how the photos came out.

I used a vintage sheet for the back and some fleece for the batting. After much debating I decided not to bind or quilt it. I also have not tied it at all. I was wondering, do you think the ties would be distracting while "I Spying?" I can always add them later if I am so inclined.

A few years ago Cliff had this great throw with a pocket that could be folded into a pillow. So I added a pocket on the back so that it could fold into a travel pillow.

I made a cute cover for the pocket and sadly, when it is folded it's on the inside. My ability to visualize the fold process failed me. I will not be going back to fix that. What's done is done.
Posted by Jane at 9/02/2008 4 comments: